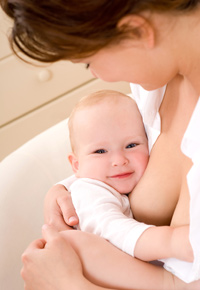 Of course, the health benefits of breastfeeding are well known, but there are other positives I didn’t realize until I experienced them. When my first son was unable to latch on, I chose to pump exclusively for him for five months, until my body was no longer fooled by the artificial suckling. While he received the natural nutrients that my body provided, I felt rejected. That feeling was the exact opposite of what I experienced when I nursed my second son.

I guess I’m glad that no one told me about the emotional benefits of breastfeeding when I was unable to nurse my first son. I’d read about positions and techniques and ways to avoid “nipple confusion” (which is a pretty funny term, when you stop to think about it!). I’d taken a class taught by a lactation consultant and brought my thorough notes to the hospital when it was time for my baby to be born. When he didn’t take to nursing at first, I hung on every word of the nurses, lactation consultants, and veteran moms I knew. But nothing worked.

For the first couple weeks, I followed their advice and offered my son the breast at every feeding. His angry screams felt like stabs to the heart of my womanhood. As I held him and calmed him, my own tears mingled with his. Then, I fed him breast milk through a feeding tube taped to my finger, pumped, and cleaned the pumping supplies. While I willingly sacrificed those extended time periods to provide breast milk for my baby, I came away from them, feeling like a failure. After a few outpatient appointments with lactation consultants, I resigned to pumping for as long as I was able and armed myself with bottles-a-plenty.

When the pediatrician would ask if I were breastfeeding, I felt compelled to answer honestly: No, I was pumping.

“Well, that’s the same thing,” they would say. I knew what they meant: My son was getting the nutritional benefits of breastfeeding. Somehow, though, that didn’t feel like it was enough.

While I was hopeful that my second son would cooperate a little better and thus shorten the amount of time required to feed him, little did I realize the other benefits, as well. Instead of feeling rejected, it made me feel fulfilled and whole, accepted. I don’t know exactly what goes on with those wacky postpartum hormones, but while I was nursing, I felt as they were being soothed or gently stroked and warmed. The closeness I felt to my son was something I cherished. Something about the fact that the fluid sustaining his life flowed from my body to his made me feel like the separation caused by birth was not as final as my emotions sometimes told me that it was.

I’m not the type to go on a campaign about the health benefits of breastfeeding, but I tell other moms that nutritional concerns aside, nursing has a major benefit: a closeness unlike any other.