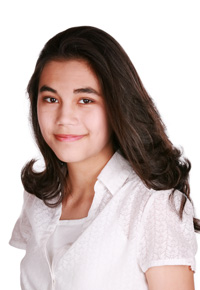 My boyfriend & I had sex about a month ago , on the 14th of June & I’m worried about being pregnant /: I know some of this stuff it just getting to my head , but I’m still scared out of my mind , will you please help me !

We had protected sex with a condom that was “super mega” strength , actually we used 2 (which I know is not a good idea now because of friction) , although neither broke. Although he did want to stick his bare penis inside of me , he wiped it off first though because he previously ejaculated. Although he didn’t even get it in because the tip was sensitive & it hurt. The sex lasted about a minute or 2 , if that’s important. & it was our first time.

I didn’t even worry about it until 2 weeks later it hit me that there is a possibility that I could have gotten pregnant. So , since then I’ve most likely been getting paranoid more & more. My tummy seems to “get bigger” to me, i’m pretty sure it’s just my normal belly jiggle , plus I have NOT by any means been eating right , soda & candy & rarely real food.

My period was pretty normal , although it only lasted 4 days & was fairly heavy , although this has happened before in the past plenty. My breasts don’t seem very tender , my boyfriend says they don’t feel different. The area around one nipple is slightly darker than the other , but that COULD have been there before.

I only feel fatigue & nausea every once in a blue moon & that was most likely due to the fact that i hadn’t eaten all day.

I am feeling more tired , but then again it’s summer & i stay up till 6:30 a.m & I’m flat out too lazy to wake myself up in the morning. So I guess i just go back to sleep when I’m FULLY rested.

I’m scared that I could just be making excuses for symptoms , but I’m also scared to death of being pregnant.. If I am , my life is over basically. I’m scared to talk to anyone , especially my family & friends(teenage girls tend to have big mouths). We haven’t had sex again since the one time. I’ve taken countless online quizzes & they say I’m most likely not.

What do you think , Hannah ? (I apologize for the abundance of information. I just though it might be necessary.)

Thank you for your question. No, you should be good to go. I wouldn’t worry about being pregnant. It’s just your nerves. Though, you’d better start getting better sleep and eating more “real” food or else you’ll be asking for some other types of health problems!

You can tell your body to calm down and get back to a normallife.